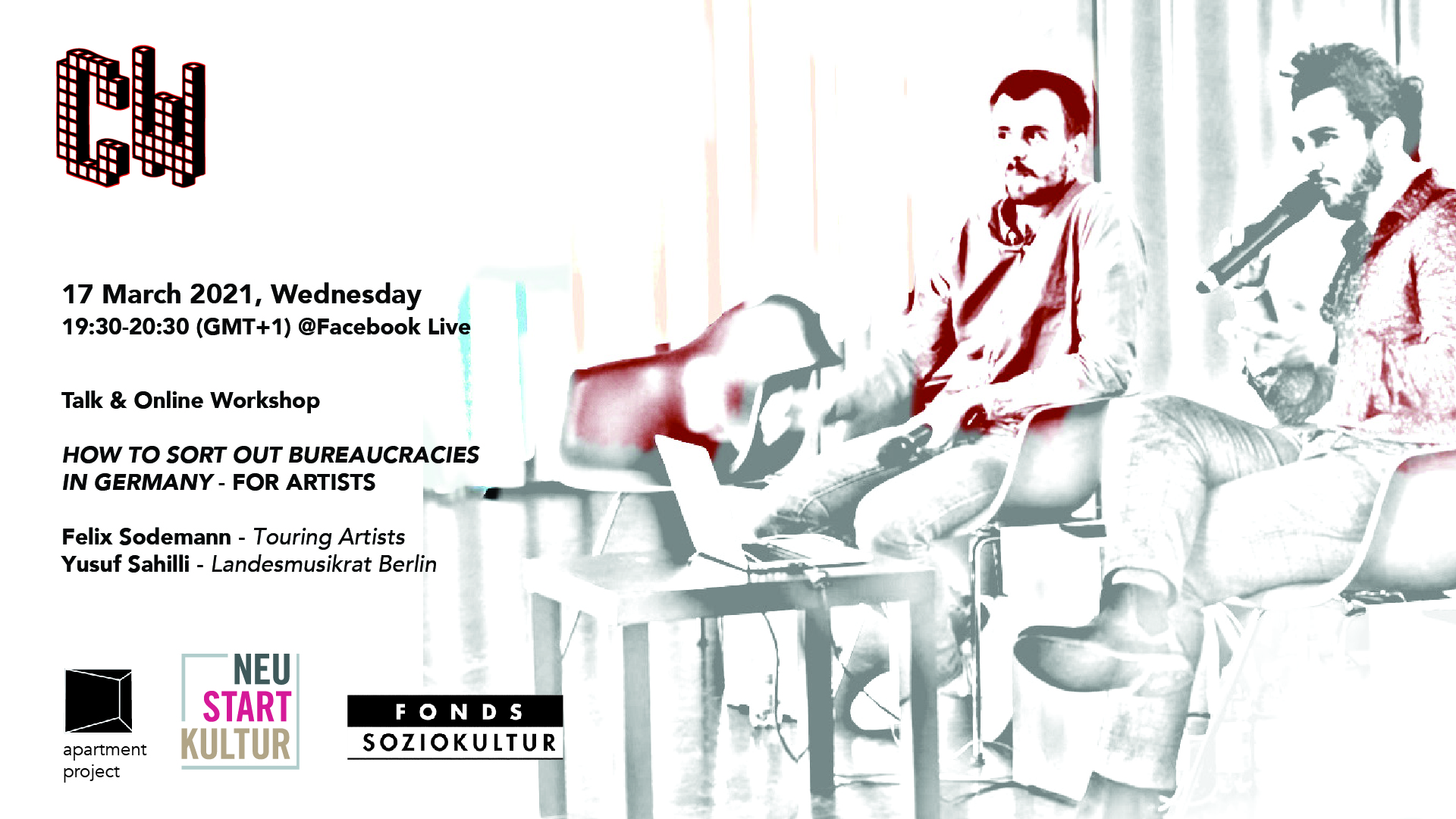 For the second episode of Chromatic Wednesday’s “Sustainability” month, we are offering a helpful guide on how to overcome the bureaucratic obstacles that artists working in any field. Most of us are indeed familiar with the matter – establishing oneself as a foreign artist in Germany can sometimes be a bit exhausting. While trying to get a foothold in the local art scene, you have to deal with plenty of administrative challenges: Is there really something called “Künstler*innen-Visum”? How do I get a Steuernummer? What is the KSK and what is it useful for? What is the difference between a Werkvertrag and a Dienstvertrag? Where can I get (legal) help?

At our studio, we will have a live talk with Felix Sodemann (touring artists) and Yusuf Sahilli (Landesmusikrat Berlin) about what it means to deal with these intimidating questions, and how to get help. After the talk, we invite you to join a small workshop via Zoom, where Felix and Yusuf will give an overview of the most important DO’s and DON’T’s and have time to answer your questions.

Having grown up in the Rhineland, Felix Sodemann landed in Berlin in 2015 after spending a couple of years in southern Germany and in Turkey. In addition to his activities as a freelance theatre artist, (theatre)filmmaker and translator, he has been working for the International Theatre Institute (ITI) since 2019, where he is particularly involved in the projects “touring artists” and “Theaterpreis des Bundes”.

touring artists is an information portal for artists and creatives working internationally that provides comprehensive information on visas/residence, artist status and contracts, transport/customs, taxes, social security, other insurances, and copyright. touring artists is extended by “International Artist Info Berlin” (IAIB, funded by the Senate of Berlin, Department for Culture and Europe), a program that gathers information especially for artists who recently moved to Berlin. Part of the IAIB-program is the “MONTHLY MEET-UP”-workshop-series.
touring artists is a joint project of the Internationale Gesellschaft der Bildenden Künste (IGBK), Dachverband Tanz (German Dance Association) and the International Theatre Institute in Germany (ITI), initiated and supported by the Federal Government Commissioner for Culture and the Media (BKM). touring artists provides a free help desk service for individual consultation (in cooperation with SMartDe – Netzwerk für Kreative e. V.).
www.touring-artists.info

Yusuf Sahilli is an indie-pop singer-songwriter, born and raised in Berlin. Half Turk, half Syrian. Lived in Australia and Liverpool. Travelled the world. Worked for a global player in international pop music. Visited festivals from Texas to Beijing. But now he’s focussing on his own career as a musician and running his own label to release promising authentic artists, producing records on studio ship MS Heiterkeit in Berlin.

Landesmusikrat Berlin (The State Music Council Berlin) is an umbrella organization that represents the interests of institutions and associations, which shape Berlin’s musical life. It also advocates the political interests of its members, provides a coordination hub and plays an advisory role towards the federal state government and the parties of the Berlin House of Representatives. The State Music Council influences the cultural landscape through its own projects and focuses on youth cultural activities.
https://www.landesmusikrat-berlin.de/

><
“Chromatic Wednesdays” is a culmination of our recent collective consciousness — the pandemic has disrupted our ability, creativity, and production. How do we as artists and intellectuals develop alternative forms of thinking and articulate this unclear existential situation? How can we get out of this limbo? How can we expel it?
Addressing these questions, Apartment Project developed a program titled Chromatic Wednesdays, which consists of 33 individual events, that will take place within eleven months starting from December 2, 2020. Each month will revolve around specific themes on current issues such as; immigration, pandemic, ecology, sustainability, gentrification, gender, survival, boundaries, geography, freedom of speech, and future. On three Wednesdays per month, artists, musicians, performers, scholars, scientists, and cultural practitioners will be invited to collaborate and share their research, practices, and experiences. Space will host a variety of events such as; concerts, performances, workshops, film screenings, lectures, exhibitions, readings, panel discussions, and dinner gatherings.