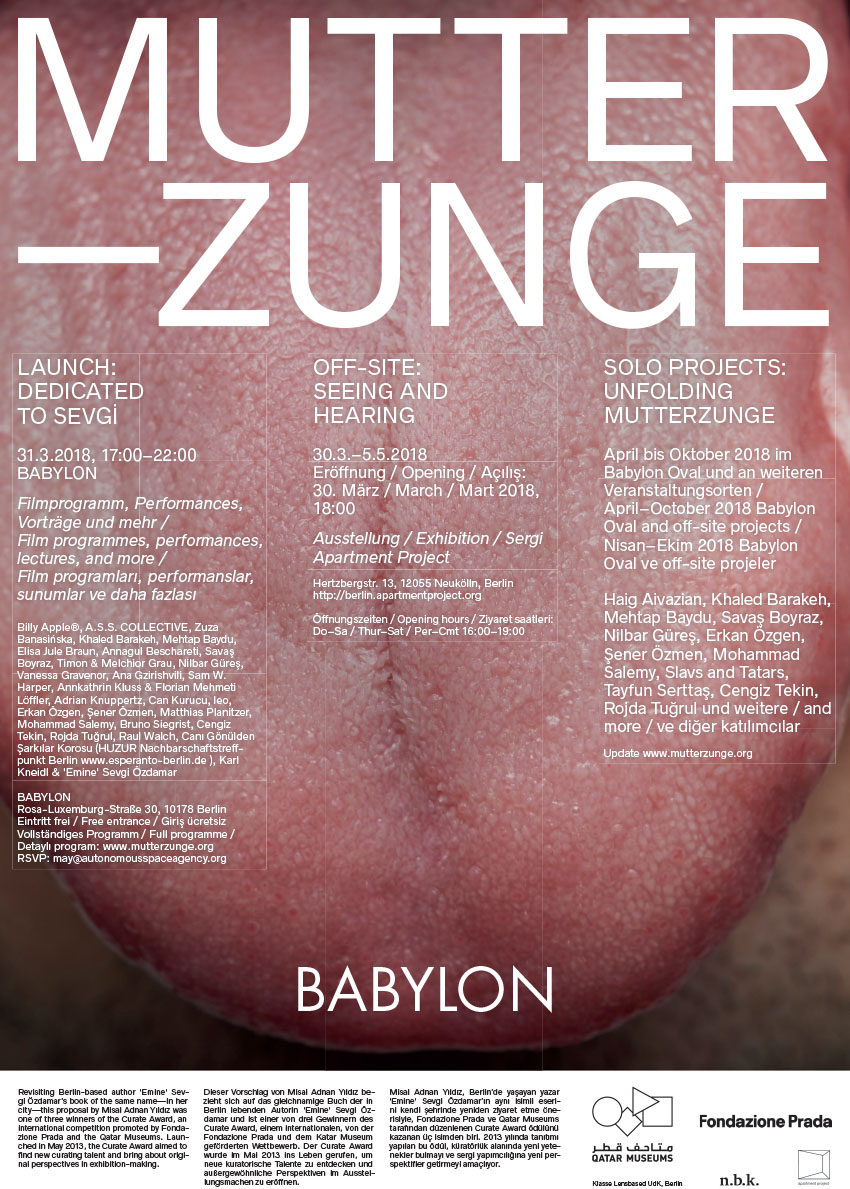 Beyond the events and presentations at Babylon, Mutterzunge also presents several off-site projects. First among these collaborations is an exhibition entitled “Seeing and Hearing”, hosted by Apartment Project in Neukölln from March 30th to April 5th, 2018. This is an outcome of a workshop held by Loading, a Diyarbakır nonprofit art space, at nbk’s Berlin studio residency apartment, during their research visit as part of Mutterzunge.

‘The tongue has no bones; wherever you turn it, it turns.’ (p.9)
Mutterzunge by ‘Emine’ Sevgi Özdamar

Mutterzunge is a phrase which does not literally exist in standard German. Özdamar’s Mutterzunge (1990: I. Bachmann prize) proposes not only a literal translation of “mother tongue,” but also an artistic gesture in German, since “mother tongue” exists in such other languages as English, French, and Turkish, but not German, which only uses the phrase Muttersprache—“mother language.” She departs from the deep connection with her own mother, and questions Arabic, German, and Turkish, the languages she deals with, as spaces of abstraction, conceptual thinking, composition, intimacy, and articulation. The book investigates the politics of migration through minor gestures of everyday life, from the narrative perspective of a young Turkish migrant woman living in Germany. Creating an open space for our imagination, it develops critical questions on language, state, the public, memory, and the sense of belonging among others. The narrator begins by explaining that in her language, Turkish, “tongue” also means “language”:

For each story in ‘Emine’ Sevgi Özdamar’s work of fiction, the project generates a staged act in a specific location in Berlin. Each act will include attempts, concerns, and questions about translation, moderation, and editing between diverse languages, communities, and cultures. It aims to reconnect readers with users, increase listening skills with reading interest, and introduce individual writings to co-editing practices. It sometimes takes shape at a long table for shared conversations, or at a brainstorming session in a studio for new ideas, a non profit space dedicated for collective thinking, or at a bar, language class, or cinema—wherever we hear foreign languages.

Circulating conversations, research, field surveys, and methodic thinking, Mutterzunge intends to rewrite those stories with an understanding of current questions on autonomy, anonymity and authenticity.