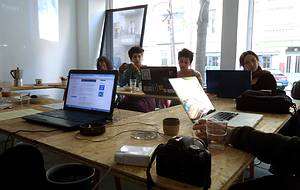 ‘The round table’ is proposing a debate around the actual situation of the cultural independent institutions in the Arab countries and in Germany:

the role, the challenges, the future, especially in light of the political and economic changes and the impact on the work of cultural institutions,  their role, their sources of funding, their management and funding models and its relationship with the society .  Together with you we would like to discuss  the challenges of the cultural institutions and artists in the Arab countries and Germany

The aim of the round table is to exchange and share the ideas and practical experiences among the Arab and German participants, in an attempt to compare the situation or to find common ideas and cases, and this will be through comparing different and varied models of management and financing mechanisms, also the relationship with the community and with the state.

The round table raises the following questions:

Marwa Helmy, born in 1979, completed a Bachelor’s degree in French literature at Ain Shams University in Cairo, received a diploma in journalism at the Centre de Perfectionnement des Journalistes (Paris) in 2007 and then received her Master’s degree in cultural and media management at Senghor University in Alexandria in 2009. She presently lives and works in Cairo. She is the deputy manager of the not-for-profit organization Al Mawred Al Thaqafy, which supports the work and networking of artists in the Arabic world. She is also the manager of the cultural policy program in the organization. She also gained professional experience for example as a program coordinator in the Jesuites Association in Cairo and as an editor and translator for French and Arabic for the Egyptian Ministry of Media and Communication. She is working currently on her PHD in cultural policies in the Arab region.

Deena Abdelwahed, was born in 1989 and lives in Tunis. She studied interior design at the Superior Institute of Fine Arts in Tunis. She designed furniture for the firm Woodstore and worked as an administrator for the Semia Achour gallery in La Soukra. She was a coordinator and cultural advisor for the second Festival des Esprits Libres Tunisiens for photography, music, cinema, dance and sculptural art in Gabès 2012. Deena Abdewahed worked as an artist herself, singing with the jazz funk band So Soulful. She is interested in the influence of art and culture on social processes.Our guests are currently participating in the cultural management training organized by Goethe institute in Berlin and Hamburg

Dina Kafafy was born in 1985 and lives in Cairo where she received her Bachelor’s degree in integrated and communication management and art. She completed her Master’s degree in Fine Arts at Wimbledon College of Art in London. She taught at the Department of Performing and Visual Art at the American University in Cairo and is presently working as programme coordinator and responsible for the residency programmes of the Townhouse Gallery.

Mohamed Hussein, born in 1975, lives in Bagdad where he studied Fine Arts at the Academy of Fine Arts. He received his Master’s degree in curating in 2009 from the Chelsea College of Art and Design in London. Mohamed Hussein describes himself as a freelance artist, designer, curator and researcher.  He has exhibited his work at the Institut du Monde Arabe in Paris, the Baladna Gallery in Amman (Jordan) and during the Ten Iraqi Artists exhibition in Frankfurt. He is interested in the boundaries between architecture, design and visual arts.

RADICANT NETWORKS aims is to capture the complexity of art & cultural production generated by artists working multi-professional and on an interdisciplinary level and which are frequently ore temporary on a cross-country move.

With a range of different formats like interviews, presentations, artices and workshops RADICANT NETWORKS explores and researches the possibilities of generating and linking contextual scopes between the trajectories of a continuous shifting context. Radicant Networks reveals potentalities, the richness of multy layered perspectives and their value by irradiating similar or overlapping concerns, themes and visions within the art field.  RADICANT NETWORKS reflects but also quest mechanisms of art production within its social, cultural, political and theoretical contexts.

To share and produce knowledge about these issues and to open the collected data to a wide public is a main pillar of our work.
RADICANT NETWORKS was initiated 2011 by Tatjana Fell

Project Category:
Art In Political Context, Collaboration with other Institutes