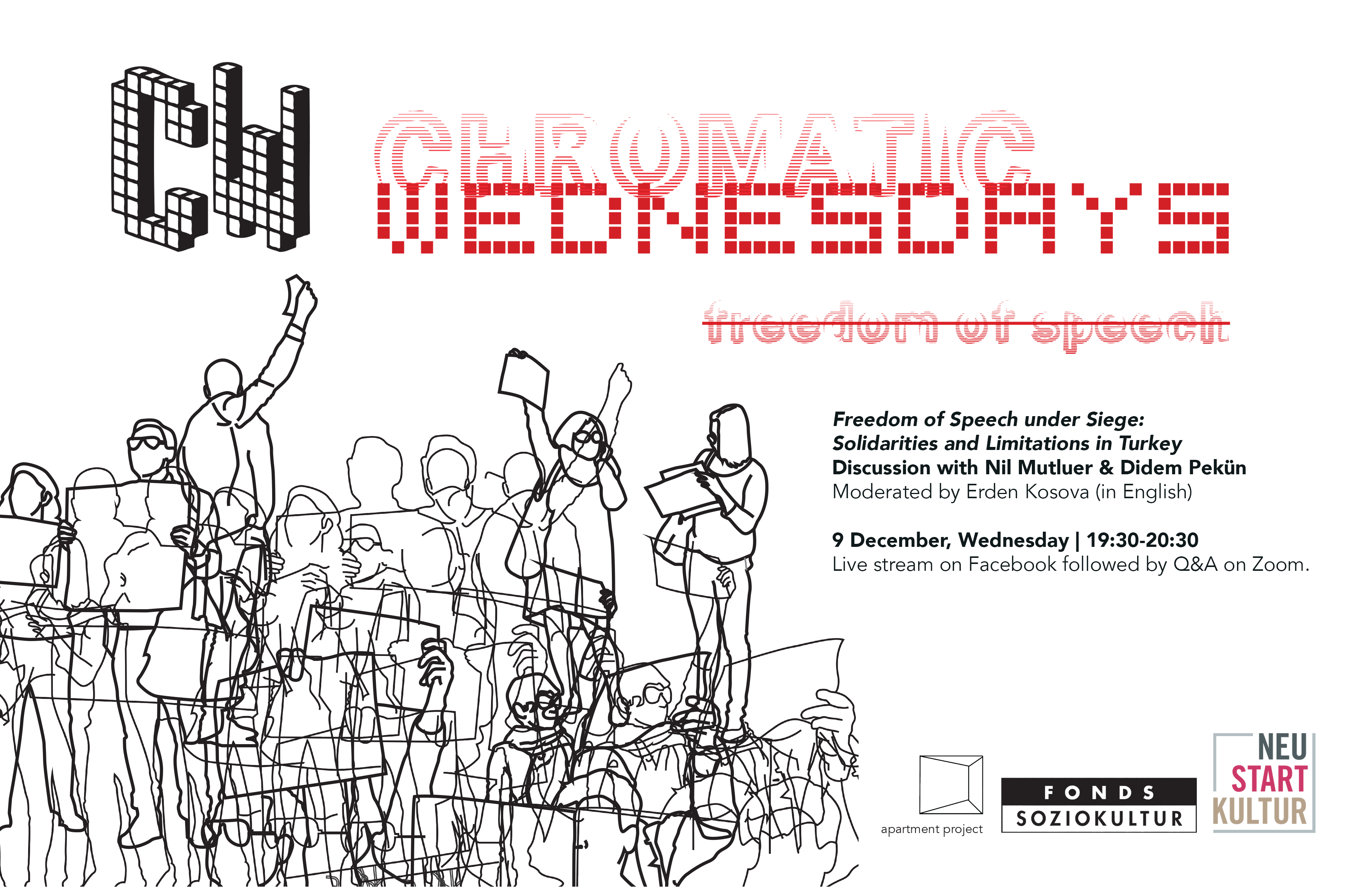 The second meeting of the Chromatic Wednesdays will host Didem Pekün (filmmaker) and Nil Mutluer (academician). The conversation will briefly outline the recent past and the present of the political repression that has been exerted on the opposition, the academia, and the art scene in Turkey and will present examples of practices of collective solidarity within the country and abroad, (specifically, the ongoing campaign against the three years long imprisonment of Osman Kavala). Pekün and Mutluer will also discuss the impacts of personal and institutional self-censorship on artistic and cultural practices.

Nil Mutluer, Dr. (Ph.D., Gender Studies, Central European University, Budapest) is currently the Einstein Foundation Senior Scholar in the Diversity and Social Conflict Department at Humboldt-Universität zu Berlin, Germany, where she was an interim professor of Public Law and Gender Studies Department in 2018. Until February 2016 she was the Head of Sociology Department at Nişantaşı University, but after she signed the Peace Petition titled “We Will Not Be Party to This Crime” she was fıred from her position by the university administration. Then, she was awarded the Philipp Schwartz Research Fellowship of Alexander von Humboldt Foundation (2016 – 2018). She has published extensively in the areas of diversity (gender, ethnic and religious), nationalism, migration, memory studies, and Turkish politics in various academic and non-academic journals and newspapers. She is the editor of the books States of Gender: The Intersectional Borders of Gender in Turkey (2008), States of National: Citizenship and Nationalism, Are We Aware? (2008) and co-editor of Transnational Othering -Global Diversities: Media, Extremism and Free Expression (2019, with Elisabeth Eide, Kristin Skare Orgeret). She co-produced the weekly sociological and political analysis television show ÖteBeri broadcasted on IMC TV (with Emine Uçak). She is the consultant of the 46th Antalya Golden Orange Award (Altın Portakal Ödülleri) winning documentary called “Me and Nuri Bala” (2009, directed by Melisa Önel) which is about the life story of the first feminist transvestite stand up artist of Turkey, Esmeray. She is the founding member of SODA (Social Solidarity Network), and active members of Green Thought Association, the Helsinki Citizens Assembly (hYd), and P. E. N. Turkey.

Didem Pekün combines research and practice in her work. In her essay films, she addresses how violence and displacement define and destroy life. Her documentaries and video installations have been shown internationally and have received various awards. She is a founding member of the Center for Spatial Justice (MAD). She holds a BA in Music from SOAS, an MA in Documentary from Goldsmiths, and a practice-based Ph.D. in Visual Cultures from Goldsmiths, University of London. After being a faculty member at Koç University, a Research Fellow at Visual Cultures, Goldsmiths, a Joint Fellow at Institute for Advanced Studies & Visual Studies Platform at CEU, Budapest, she is currently a fellow at Graduate School / Berlin Center for the Advanced Studies in Arts and Sciences @ Universität der Künste Berlin.

Erden Kosova is an art critic from Istanbul and lives currently in Berlin. As a content producer, he has been contributing to the visual art events held at Maxim Gorki Theater since 2013. With Galit Eilat, he is currently working on the discursive program of Art in Dark Times, hosted by transcultural project bi’bak. Kosova also takes part in a research project organized by Hafıza Merkezi (Istanbul), which focuses on the ways in which visual arts have approached human rights violations in the recent past of Turkey.