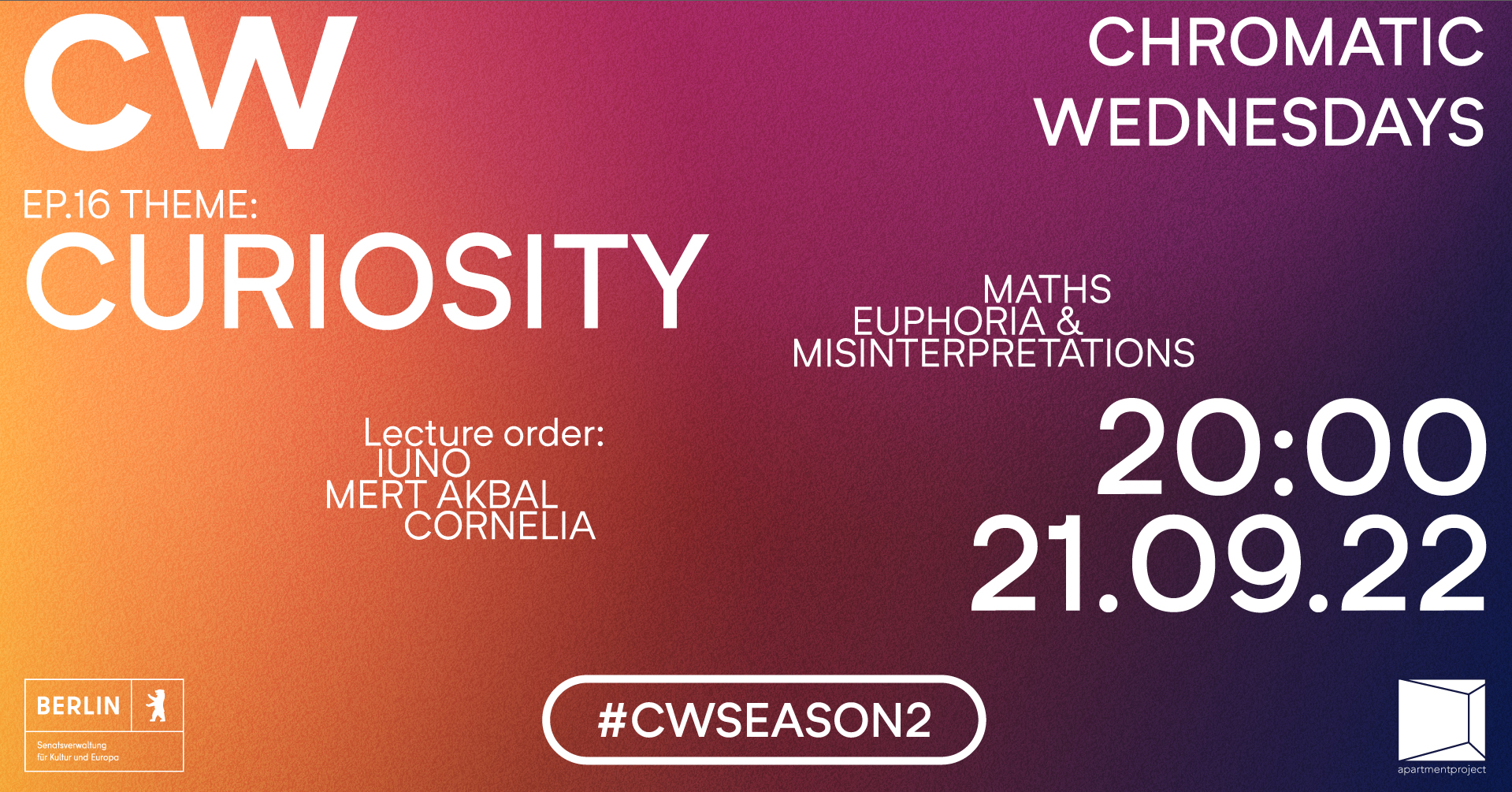 «Misinterpretation of Dreams» by Mert Akbal

«Maths and Crushes and so on» by Cornelia Fachinger

The ambition to explore the unknown is the main engine driving the artists’ presentation of their lecture performances under the «Chromatic Wednesdays’» theme «Curiosity». Iuno Christin Bolte explores new working techniques and forms of action in digital space and beyond. After working on a reconceptualization of touch as an embodied metaphor of artistic reception, Iuno’s research shifted to exploring visual economies of virtual spaces as they became increasingly important with the outbreak of the Covid 19 pandemic. Mert Akbal’s lecture-performance presents animated paintings accompanied by spoken thoughts on the fear of war, virus, and failure and their paralyzing effects; on the simulation and memory functions of imagination, dream, and art; and on curiosity as the driving force of our intellectual development and the antagonist of fear, as both fear and curiosity are directed toward the unknown. For her improvised lecture-performance Cornelia Fachinger enters a special state of rapture and tells us about everything that interests her besides art.

Iuno Christin Bolte is an artist, critic, and somatic practitioner based in Berlin. Focusing on somatosensory experiences as a means of understanding reception aesthetics and artistic knowledge production, Iuno’s work alienates popular artifacts and texts on a cryptographic mission for change. A museum becomes a martial arts hall, a networking conference a Live Action Role Playing world, a hotel room a museum, an art fair a rave, and the gallery a space a care.

Mert Akbal is a visual artist and researcher. His artistic work and scientific research include topics in cognitive science such as consciousness, dreams, and visual expression, as well as the exploration of new digital media and visual art in scientific research. He has worked at the Saar College of Fine Arts with a focus on interactive media art and at the Max Planck Institute for Cognitive and Neuroscience with a focus on experiments in virtual reality. His artistic works have been presented on numerous international platforms, such as the International Symposium on Electronic Arts in Hong Kong (2016), in Durban (2018), and at Ars Electronica in Linz (2021).

Cornelia Fachinger studied fine arts in the fields of sculpture, art in public space and performance in Saarbrücken and Vienna. She is a master’s graduate of the Institute for Art in Context at the Berlin University of the Arts. She develops concepts that incorporate structures and conditions within (artistic) spaces and events, such as a room spray of essential oils for the Kunstraum Niederoesterreich based on the result of its energetic evaluation, the short-term training of an art association to become a canon choir, or a family sculpture as a video performance in the context of a historic building in Berlin. Currently she is engaged in statistical programming.

The lecture performances by Iuno Christin Bolte, Mert Akbal and Cornelia Fachinger are presented as part of «Chromatic Wednesdays», a bi-weekly event series that aims to bring together creative thinkers from diverse backgrounds. The performances start at 20.00 at Apartment Project (Hertzbergstraße 13, 12055 Berlin, doors open at 19.30) and can also be followed online on Youtube (https://youtu.be/5E-wAXeI_vA).