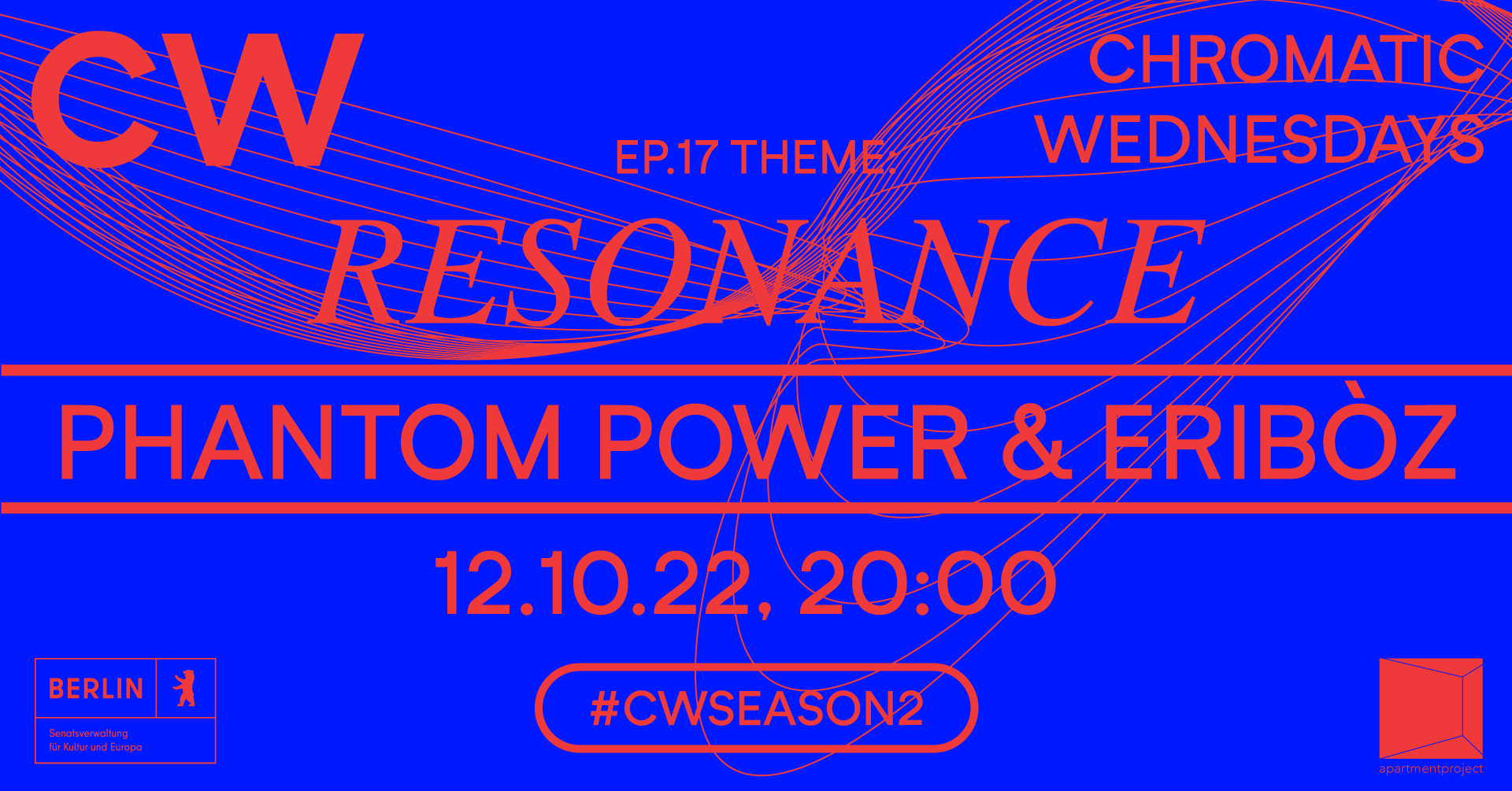 Resonance magnifies a stimulus by allowing vibration to makes it oscillate – a phenomenon explored this month by «Chromatic Wednesdays». In this edition two performances revolve around resonance. Phantom Power, founded in 2014 by Kai Fagaschinski and Michael Vorfeld, offer melodic and rhythmic aspects in which clarinet and drum merge in sound phenomenological ways. By interlacing both instruments with interferences and difference tones, they invite a third player to join their duo as a psycho-acoustic phantom.

Similarly, the duo Eribòz’s performance expands the definition of musical duo, as their music evolves between the two individual positions, represented by Erika Sollo and Fabrizio Fenu, and their collaboration, where their voices and instruments merge into each other’s sounds. Objects resonate, creating an ever-changing flow of sound. The music hovers between concrete and electronic music, searching for unexpected sounds that lie beyond melody and rhythm.

Kai Fagaschanski (b. 1974, Dennenberg/Elbe), based in Berlin, is clarinetist, composer and performer focusing on subtle musicality, noise and sound phenomena. The autodidact has developed his own musical language, which is characterized by a sophisticated multi-sound technique. Rooted in the abstract, it contains an enigmatic expressivity and pre-melodic quality. His current projects include The International Nothing (with Michael Thieke), The Dogmatics (with Chris Abrahams), The Magic I.D. (with Margareth Kammerer, Christof Kurzmann and Michael Thieke), Musik (with Burkhard Stangl), Los Glissandinos (with Klaus Filip), as well as Berlin’s 24-member Splitter Orchestra.

Musician and visual artist Michael Vorfeld (Berlin) plays percussion and self-designed string instruments, realizing electro-acoustic sound works. He is active in the fields of experimental music, improvised music and sound art. In addition to developing site-specific installations and performances with light and sound, he also works with photography and film. He is a member of various formations and cooperates with artists from different fields.

Turin-based vocalist Erika Sollo works mainly in the context of improvised and experimental music, both as a soloist and in ensembles. She explores unconventional uses of her voice through extended techniques and electronic processing. Her work includes sound poetry and improvisations over texts and graphic scores. She has collaborated with musicians such as Gino Robair, Tomomi Adachi, Ernst Reijseger, Jim Black, Anthony Braxton, Eyvind Kang, Jessika Kenney, Patrizia Oliva, Stefano Giust and Tristan Honsinger. In addition, Sollo has performed interdisciplinary works with theater, dance and visual artists.

Fabrizio Fenu is a guitarist, improviser and «sound seeker» from Italy, living in Marseille. He is devoted to noise and its expressive possibilities, using adapted instruments and experimenting with non-conventional techniques involving bows, feedback, and electronics. His path through the practice of free improvisation led him to interdisciplinary work, such as in video, painting, dance, film and music. He played with leading musicians of the free improvisation scene, such as Gino Robair, Masahiko Ueji, Luca Pissavini, Ed Williams, Vincent Laju, Francois Wong and Utku Tavil.

The performances by Phantom Power & Eribòz are presented as part of «Chromatic Wednesdays», a bi-weekly event series that aims to bring together creative thinkers from diverse backgrounds. The performances start at 20.00 at Apartment Project (Hertzbergstraße 13, 12055 Berlin, doors open at 19.30) and can also be followed online on Youtube (link).