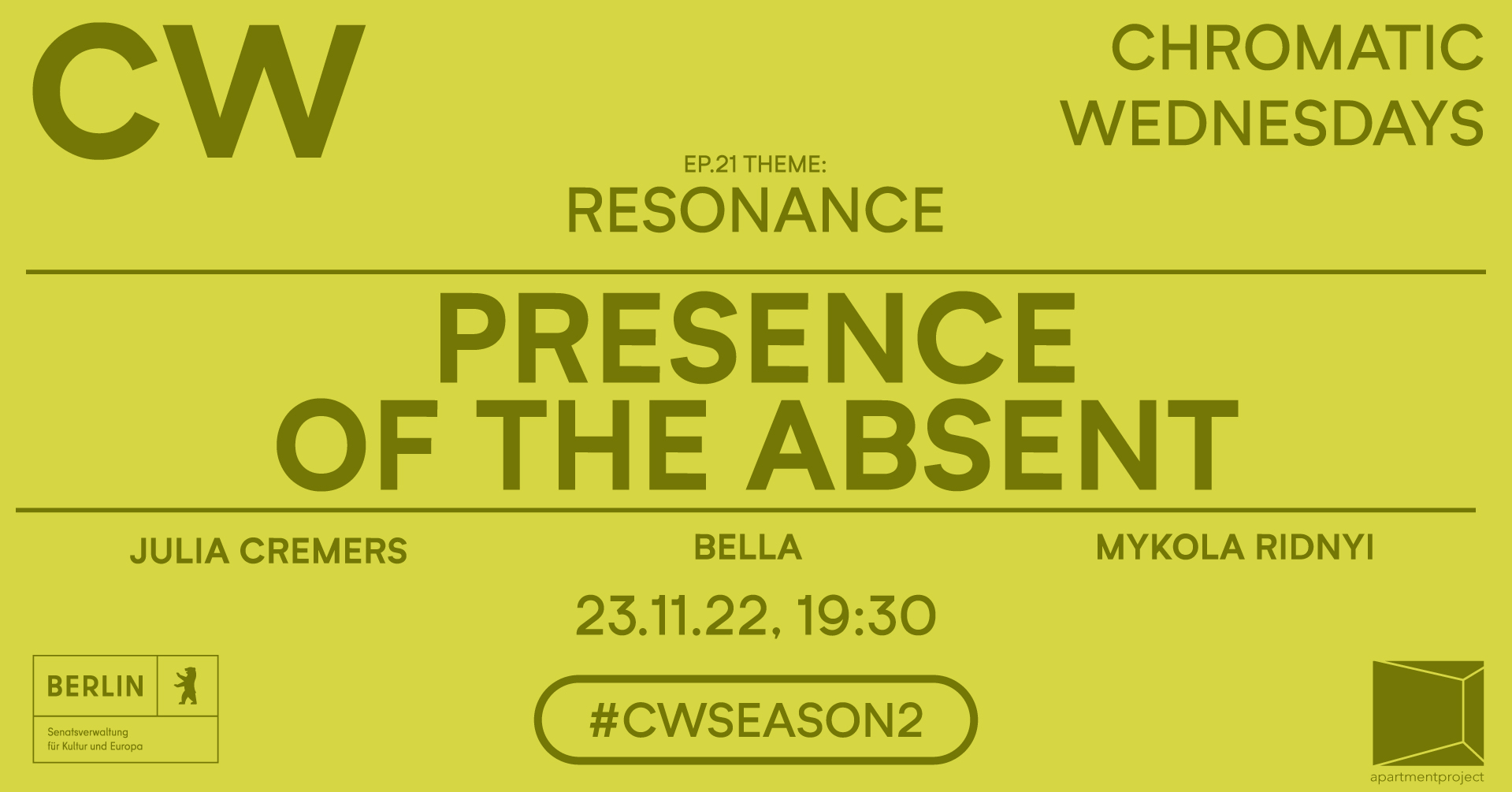 In collaboration with Errant Sound

Presence of the Absent

In her lecture performance «The Floor‘s Ocean», Julia Cremers explores the tech-savvy identity of warriors by immersing herself in the rising waters in the Dutch province of Flevoland: a 1400 square kilometer area reclaimed from the Zuiderzee in 1986 after an intensive process of drainage and dike construction. On the former seabed, which is still far below sea level, greenhouses now house valuable tropical orchids, companies are developing green solutions to sustain industrial-scale production processes, while microplastics in recreational areas testify to the growing issue of environmental pollution.

«The object contains gove (soul). Life is not contained.

Therefore, the dust of the dead inside a vase is blown out.

Life has returned to the ashes.

Film screening of «Regular Places» by Mykola Ridnyi (16 min, 2015/2022), followed by a Q&A with the film maker, moderated by Steffi Weismann

In «Regular Places», Mykola Ridnyi films the comings and goings of citizens in five public places in Kharkiv from a static point of view. Without context, the uneventful footage initially seems incongruous with the brutally violent conflict between pro-Ukrainian and pro-Russian activists that took place here just a few months earlier. Since February 2022, the city of Kharkiv has been subjected to massive attacks by the Russian army. That’s why Ridnyi overlaid the quiet images with audio excerpts from online videos: shouted threats, warnings, insults and intimidation echo in the indifferent scenes. In this way, he confronts recent traumatic memories and the current state of collective denial in his film work.

Julia Cremers (b. 1993 in the Netherlands) studied Audiovisual Art at the Gerrit Rietveld Academy in the Netherlands, completed a Master of Fine Art in Norway and currently lives in Berlin. Julia is a member of the sound art collective Errant Sound and co-organizer of PARALLAX Lab. In her performances and audiovisual installations, Cremers explores the intersection between the sensorial and virtual. She is interested in the constructed understanding of our cultural identities and our relationship to the world, observing how life can operate in (re)constructed environments. Her practice uses photogrammetry and 3D modeling, though from the embodied perspective of the artist herself. She subtly reveals her artistic choices by leaving biometric clues such as handheld camera shake, shadows, and traces of body parts.

BELLA (born in Rio de Janeiro, Brazil) works in installations, performances, videos, and makes field recordings and music albums in which she explores the physical and magical aspects of sound and light. With her performances she aims to erase the boundaries between sound and space. She holds a Master in Music specialized in Sonology from the University of São Paulo and has participated in several artistic residencies in Brazil and Europe. Her participation in festivals and exhibitions include City as a Forest – Museum of Tomorrow; Amplify – Oi Futuro; One Beat Virtual; CTM Music Makers Hacklab; Ende Tymes Festival (New York); Sonic Matter Festival (Zurich); and Digital Art Biennial.

Mykola Ridnyi (b. in Kharkiv) is an artist, filmmaker and curator living and working in Kiev. In 2008 he graduated from the Kharkiv State Academy of Design and Art. Ridnyi is a founding member of the artist collective SOSka group. In 2022 he curated several screening programs of Ukrainian films and videos at MAXXI Rome, Museum Folkwang Essen, National Gallery in Sofia and other venues. Ridnyi works across media, from site-specific installations and sculptures to photography and experimental films. His work has been shown in exhibitions and film festivals, including Survival Kit 13 (Riga, 2022), Transmediale at HKW (Berlin, 2019), the 35th Kassel Documentary Film Festival (2018), and All the World’s Futures at the 56th Venice Biennale (2015).

The performances by Julia Cremers, Bella and Mykola Ridnyi are presented as part of «Chromatic Wednesdays», a bi-weekly event series that aims to bring together creative thinkers from diverse backgrounds. The performances start at 19.30 at Errant Sound (Rungestrasse 20, 10179 Berlin, doors open at 19.30) and can also be followed online on Youtube (https://youtu.be/JdWgGxrYYX0).