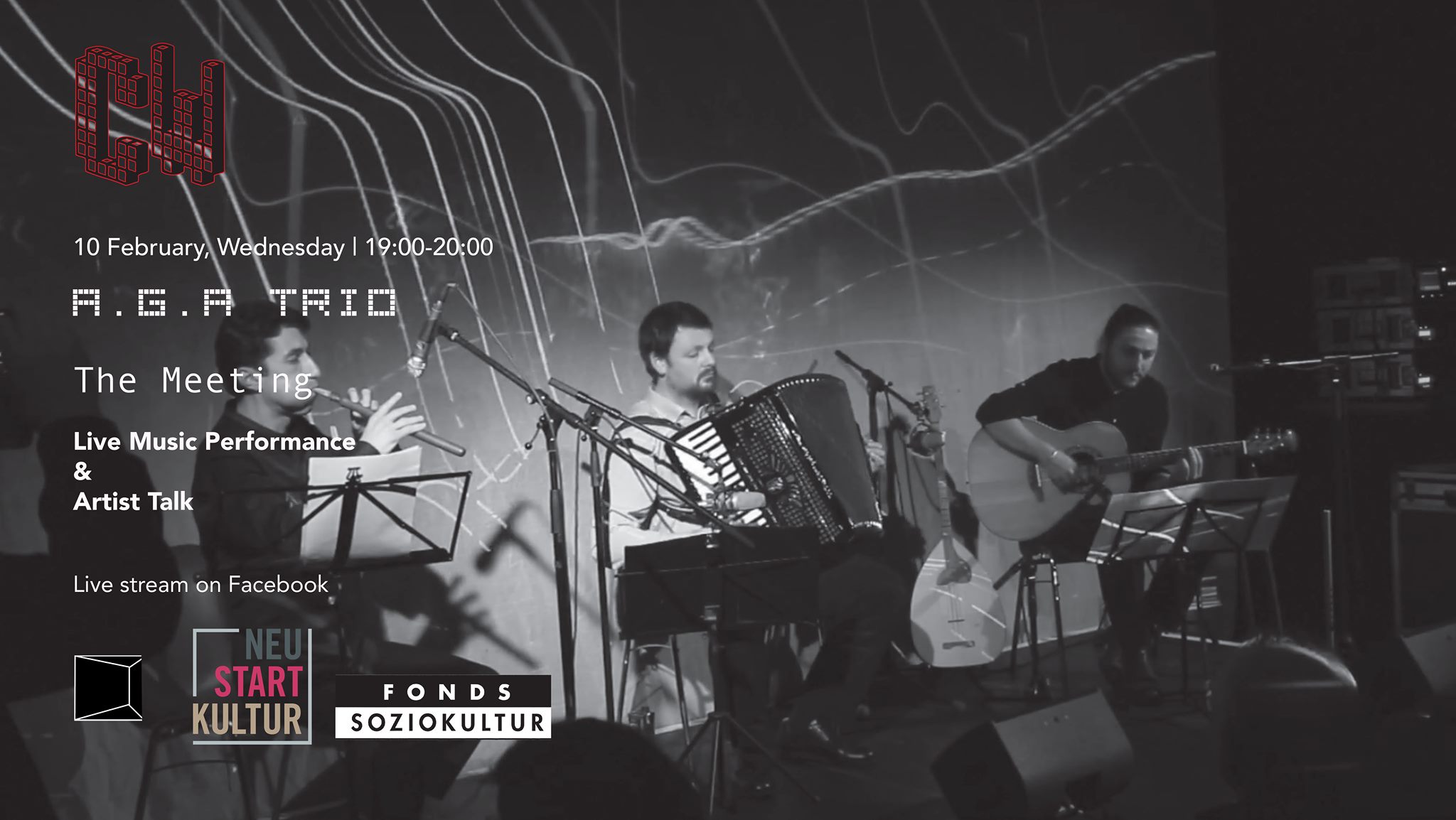 This week on Chromatic Wednesdays, we are following the valleys of the mountainous region of the South Caucasus and Eastern Anatolia only to discover the everlasting bond and attachment between its people and the cultural heritage that is overflowing across its shared lines. For the first episode of our Borders theme, we are thrilled to welcome the musical embodiment of the region’s intertwined and rich composition — A.G.A. Trio, namely Deniz Mahir Kartal, Mikail Yakut, Arsen Petrosyan from Turkey, Georgia, and Armenia respectively. Masterfully playing the three kindred instruments -kaval, duduk, and accordion- A.G.A. Trio creates a harmony that uncovers the melodic amplitude and the vast array of timbres echoing between the passages that bridge the three neighbors. The virtuosos assemble folk tales, love songs of bards, laments for the fallen, respect for nature, and ultimately, the meeting of peoples and their co-existence.

During the event, the A.G.A. Trio will perform songs from their latest album titled MEETING, and will share the stories behind the tunes with the audience. Tracing back the history and recollecting the many encounters, their performances juxtapose the profound and poetic facade with the fearsome rebellions, gatherings, and farewells.

The event will be held in English.
Facebook Event: https://fb.me/e/2984eA2mA
Live-stream link: https://www.facebook.com/Apartment-Project…/live_videos/

Deniz Mahir Kartal was born in Istanbul in 1987. He studied Turkish folk dance at the Istanbul Technical University from 2005 to 2011. He graduated with a bachelor’s degree. Apart from dance, his passion above all is for music. Mahir plays the duduk, kaval and other traditional instruments, as well as saxophone and guitar. He has been making music since the age of five and is working on many projects which are dedicated to the most diverse musical genres, from Anatolian music to Balkan/ska/reggae to electronic music. He plays in different bands from Turkey, Sweden, Germany and the Czech Republic. Mahir has been living in Berlin since 2013. He has made many new contacts in the Berlin music scene and regularly gives concerts all over Europe. He is currently concentrating on his solo project ‚KafaNar‘, in which he creates a hypnotic danceable sound with his various instruments, vocals and loops.

Mikail Yakut played with many folk music bands in Istanbul in his younger years. Having completed a degree in sociology, he moved to Berlin and studied classical music on accordion and jazz on piano. Although Yakut’s main focus has been the traditional music of Anatolia, the Caucasus and Eastern Europe; in his music, one can hear influences from a wide range of genres including classical music, contemporary music and jazz. He especially enjoys mixing different styles and crossing genre borders while leaving room for improvisation in his live performances. Currently, Mikail Yakut is a member of Heval Trio and AGA Trio. In addition, he plays with Korhan Erel in an electro-acoustic techno duo and with Birgit Hering in a children’s theatre project. He also accompanies prize-winning author Dogan Akhanli on his performative readings.

Arsen Petrosyan has recently emerged as one of his generations main proponents of the Armenian duduk. Following in the footsteps of established duduk masters such as Djivan Gasparian and his mentor Gevorg Dabaghyan, Petrosyan has managed to carve out his own pathway through diverse collaborations with Steve Hackett (Genesis), Emirati composer Ihab Darwish, and oudist Omar Bashir among others. Between both of his ensembles, the Arsen Petrosyan Trio and the Arsen Petrosyan Quartet, he has performed throughout Europe, the Middle East, Central Asia and the Caucasus. As a solo artist, Petrosyan has also toured extensively in North America as well as the territories noted above.

Born and raised in Charentsavan, Armenia, where he currently still resides, Petrosyan’s more immediate familial roots are from the ethnic Armenian enclave of Javakhk (in the Republic of Georgia) while his ancestral homeland is in Erzurum (now modern-day Turkey). He received his Master’s Degree in Music (Duduk concentration) at the Komitas Conservatory of Yerevan in 2016. In addition to his active recording and touring schedule, Arsen has conducted master classes and lectures on the Armenia duduk for organizations such as the World Music Institute (WMI) in New York City and the Apollo Chamber Players (Houston, Texas). Notable media appearances include those on Medici.tv, Mezzo TV as well as BBC Persia among others.

>< Chromatic Wednesdays is a culmination of our recent collective consciousness — the pandemic has disrupted our ability, creativity, and production. How do we as artists and intellectuals develop alternative forms of thinking and articulate this unclear existential situation? How can we get out of this limbo? How can we expel it? Addressing these questions, Apartment Project developed a program titled Chromatic Wednesdays, which consists of 33 individual events, that will take place within eleven months starting from December 2, 2020. Each month will revolve around specific themes on current issues such as; immigration, pandemic, ecology, sustainability, gentrification, gender, survival, boundaries, geography, freedom of speech, and future. On three Wednesdays per month, artists, musicians, performers, scholars, scientists, and cultural practitioners will be invited to collaborate and share their research, practices, and experiences. The space will host a variety of events such as; concerts, performances, workshops, film screenings, lectures, exhibitions, readings, panel discussions, and dinner gatherings. ><