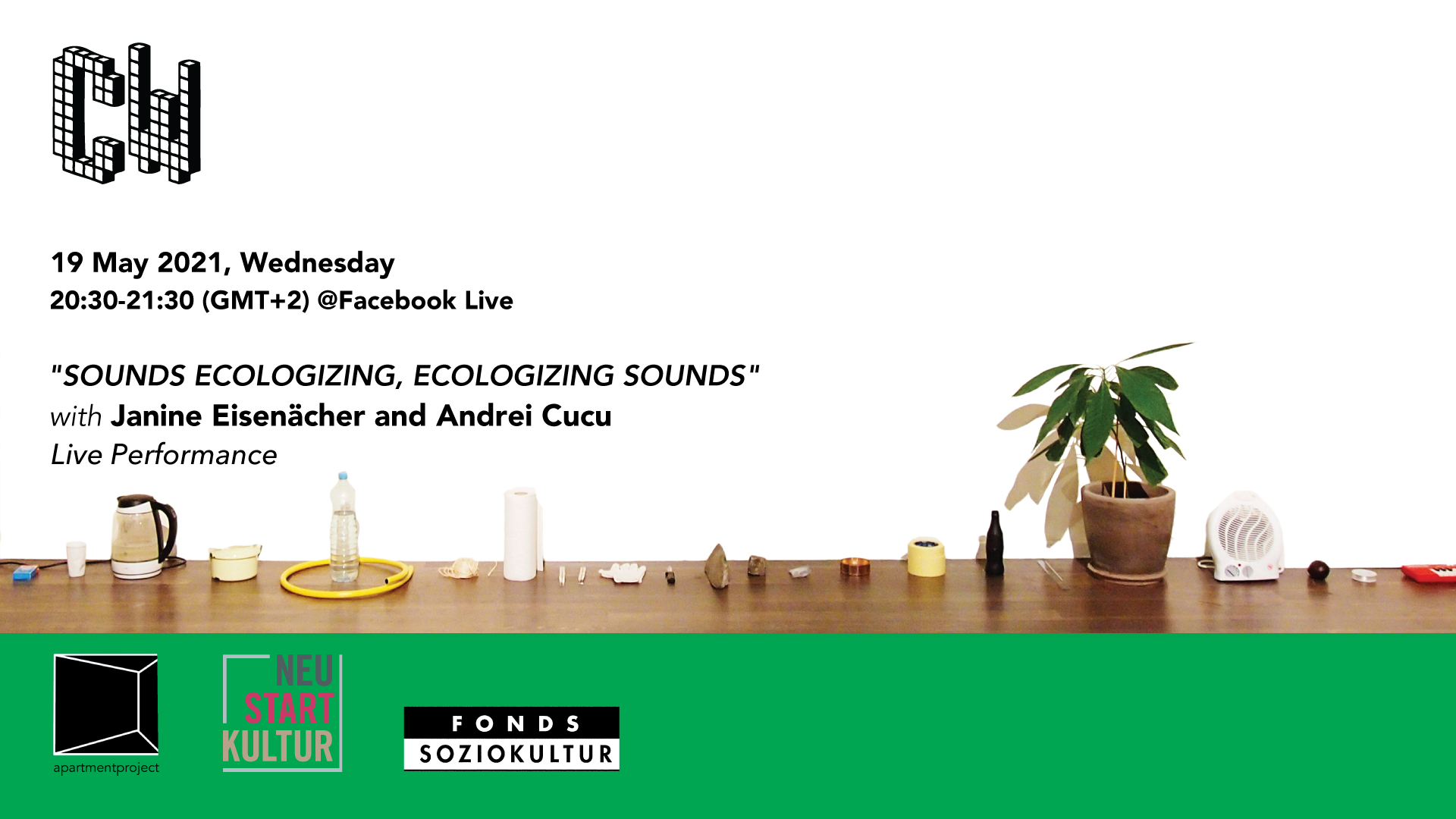 On the second episode of Chromatic Wednesday’s Ecology month, we are happy to host Andrei Cucu and Janine Eisenächer. The event will begin with Cucu’s sound performance titled NESTS, drafted as an attempt to disrupt the hierarchy between biophonic and anthropogenic sounds. It is the document of natural intervention, of a conversation between the natural soundscape of Krumme Lanke and the artist himself as a sounding human being. A conversation between birds, wind, trees and magnetic tape re-performed. Based on Bernie Krause’s acoustic ecology theory, Cucu based his sounding actions on an equal footing with the naturally occurring sounds. Anthropophony has the habit of placing itself above the natural soundscape, of disrupting the already existing way a certain place sounds and dominating it with its cars, factories, boomboxes, and cities. Cucu’s performance offers an ongoing investigative conversation.

We will transition from Cucu’s sound-sphere to Janine Eisenächer’s, who will take the floor with her performance Ecologies of Listening, Environmental Entanglements. In her performative installation, Eisenächer investigates the practice of creating and perceiving sounds as a mode of “inter-are” (S. Voegelin) and “being-with” (D. Haraway) the world. By listening to herself, to the things that surround her, to the Earth, and to the world, she wanders through different emotional and mental states and herein engages in real encounters with the things that are present in the space. Eisenächer explores the possibilities and conditions of co-existence and co-creation by playfully creating acoustic “string figures” (D. Haraway) in a care-taking, sometimes conflicting manner. These entanglements, which make every process in life a form of communication, collaboration and community, are part of us, of how we relate, of our movements and (inter-)actions, of our perceptions and experiences, of our bodies and minds, and of our world(s).

Andrei Cucu (born 1990 in Romania) studied literature and comparative studies in Romania, before moving to Berlin in 2014 for his sound design studies. His work swings between sound, text, space and nature, often as translations or interactions between these languages. His art explores the narrative or poetic possibilities of sound, often being deeply personal, reflecting small moments, intimate experiences or transformations manifested in sound installations, performances, radio shows, or audiovisual works. He is part of the Errant Sound Gallery and works as a sound engineer at the Akademie der Künste in Berlin.
andreicucu.com

Janine Eisenächer (*1983) is a Berlin-based performance and sound artist, curator, writer, and independent researcher. In her lecture and sound performances she discusses the subjects of work/labor, collaboration, and ecology from different perspectives and herein investigates Performance Art as a political and transformative practice of playful experimentation, critical thinking, and entangled coexistence. She creates acoustic spaces through body-generated and action-based material sounds and noises, focusing on the interplay of the senses of hearing, sight, and touch as well as on the practice of coexistence between the performer and things as non-human agents.
Since 2019, she is a member of the Sound Art-project space Errant Sound in Berlin and curates the exhibition, performance, and lecture series READY MAKING with sound- and intermedia artist Steffi Weismann. Janine Eisenächer studied Comparative Literature, Philosophy, and Theatre Studies at Freie Universität Berlin and wrote her Magistra thesis on the subject of action-related material sounds in contemporary Performance Art. She currently researches sonic actions with things, particularly on the sonic know-how(s), auditory knowledge(s), and memories performed and embodied in sound performances across the disciplines.
www.janine-eisenaecher.de