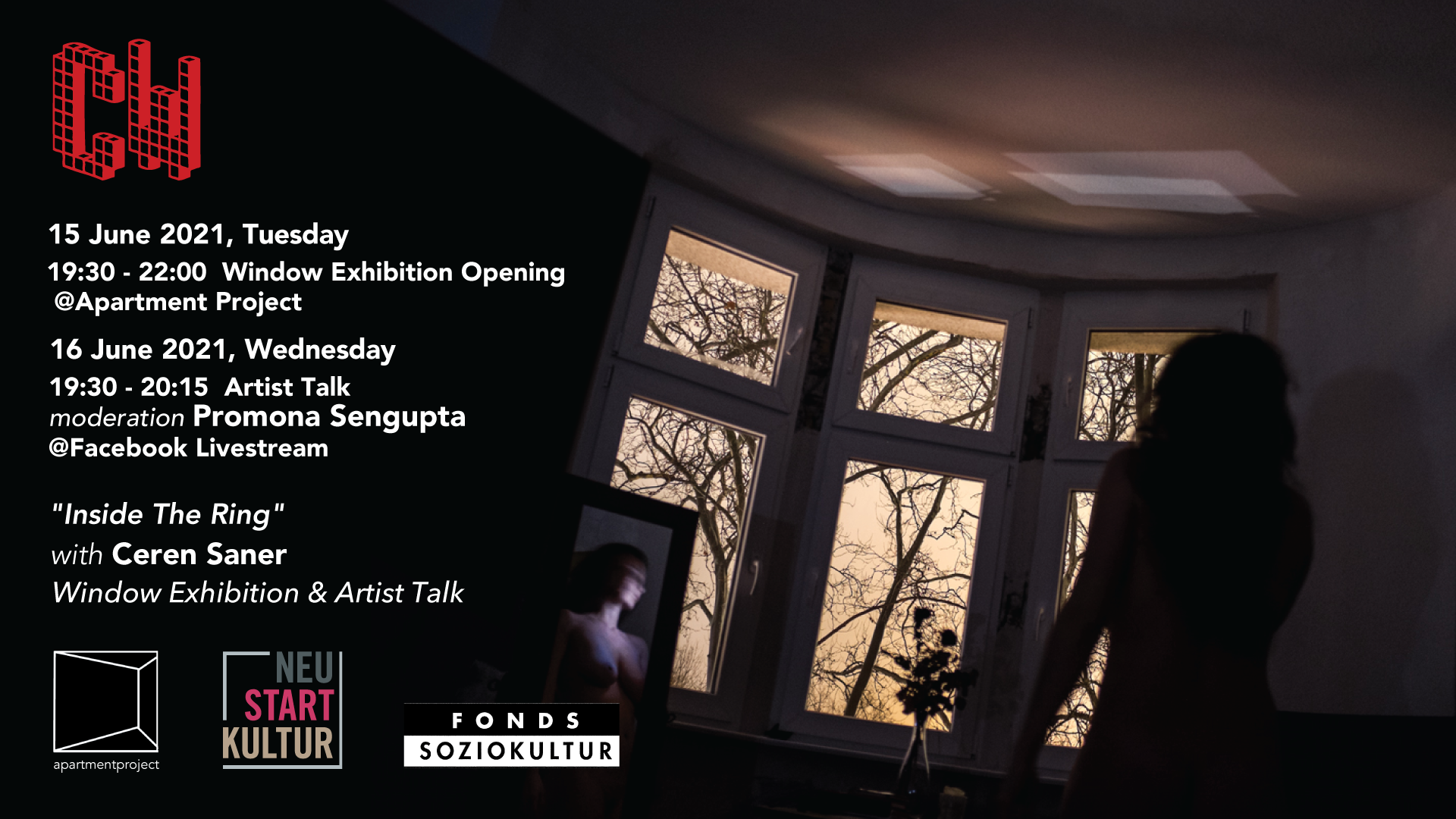 As we welcome summer and nice weather, we slowly increase the momentum and modify the format of the events with excitement. We missed socializing and we missed you. Let’s join together one more time! For the second episode of June, we host Ceren Saner at Apartment Project Space. Her window exhibition will be available with a “physical” opening on the 15th of June at the project space and we will have an artist talk with the moderation of Promona Sengupta @Facebook Live on the 16th of June as a part of Chromatic Wednesdays series.

Inside The Ring is an ongoing photo and video series that started in 2016 when the artist immigrated to Germany. It began as a personal exploration of Ceren Saner’s journey as a queer migrant femme of color arriving in Berlin. This body of work initially could be seen as the artist’s visual diary, consisting of a pool of visuals taken in public and private spaces of Berlin, but could also be seen as an exploration of the concept of belonging, of finding one’s place and an emotional mapping throughout the city. With this work, the artist explores affiliations in Berlin neighborhoods – and her inherent need to create a critical dialogue through visual storytelling and a sense of collective being.Teo Vlad (1983, Romania) studied Visual Communication in Film&TV at Edinburgh College of Art (UK), works since 2011 in Berlin as a freelance Performer and Audio-Visual Designer for Film & Theater. Vlad’s main interests have developed into live projections and visual experimentations with all kinds of modular projectors, sets, bodies, and objects in site-specific performances and theatre plays. Recently, discovering dance, the previous performative expression has merged with training in physical theatre, butoh, contemporary dance, and improvisation, acrobatics, conscious body system, contact improvisation, fighting monkey, martial arts, and more… Constantly searching to find the most unique and authentic form to put the inner untold stories in poetic form.

Ceren Saner b. 1991, Istanbul. Currently based in Berlin. She’s a self taught lens based artist who mostly produces with photography, but also video, and film alongside being interested in artist-books as a medium. Ceren navigates life through the lens and her works have predominantly autobiographical elements in them. She migrated to Berlin after getting invited by 7LettersCollective as an artist, and started #isntitlovethetour around Germany and Europe that continued for 3 years. Soon after, her first solo exhibition in Germany opened at the end of 2019. Finally, in January 2020, Saner published her first photo book “Inside The Ring” independently, created out of her ongoing body of work from Berlin. After all, Ceren Saner’s artworks have been shown in France, Germany, Italy, Lebanon, United Kingdom, United States of America, and her native Turkey.

Promona Sengupta is a curator, academic, artist, and activist living in Berlin. She currently holds the studio grant at District Berlin for the project “kal. a language where yesterday and tomorrow are the same words.” She is a PhD candidate at the International Research Center: Interweaving Performance Cultures at Freie Universitat, Berlin. She co-founded Mo’Halla, a Berlin-Delhi based pop up collective for dissident culture and politics with a special focus on South Asia