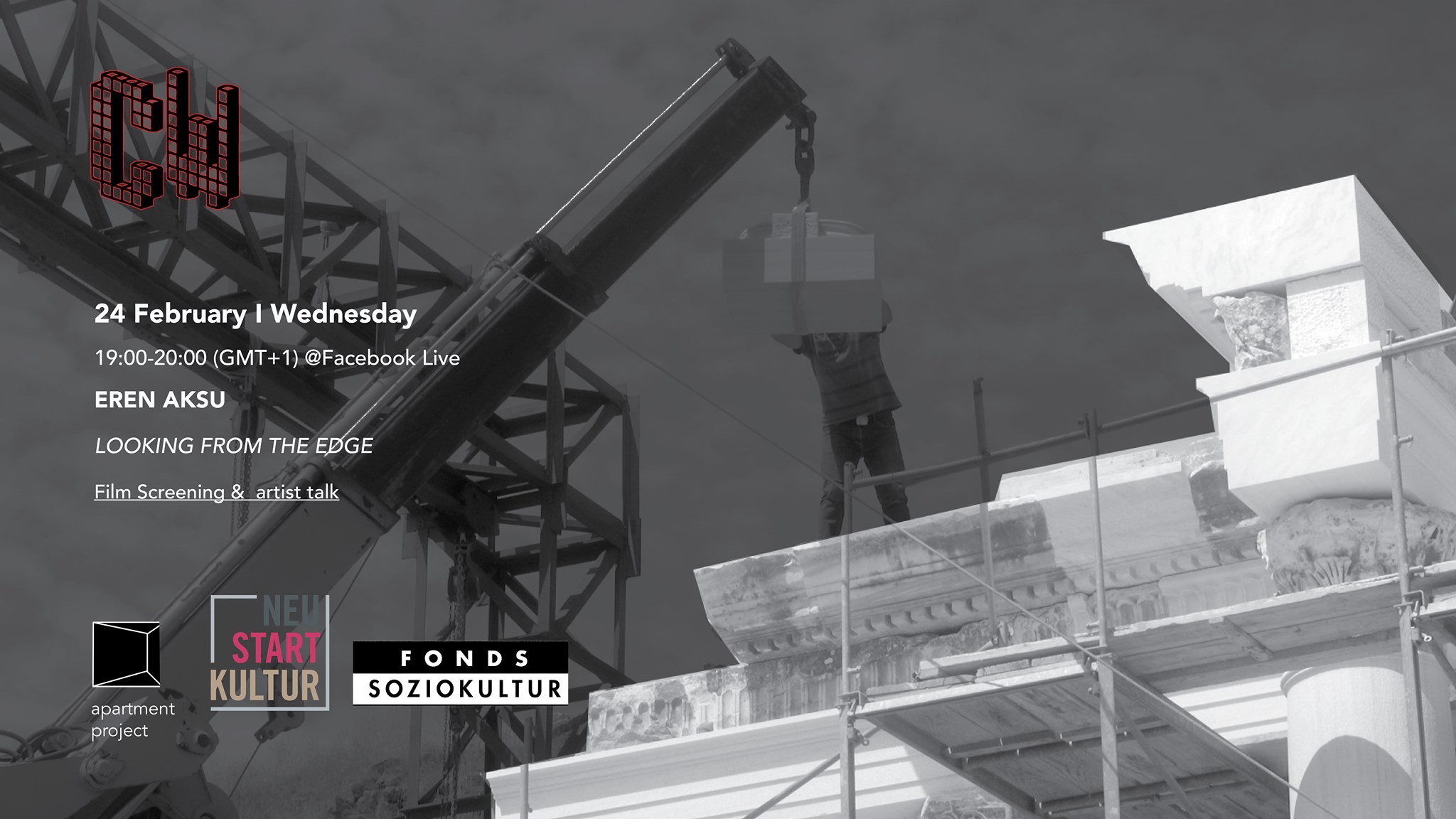 For the third episode of this month’s theme Borders, we are pleased to welcome film director Eren Aksu to our live broadcast. Eren Aksu is a filmmaker based in Berlin, whose work has been awarded at numerous international film festivals. During the event, his films titled “Cosmoroma” (8’, 2015) and “Routines” (18′, 2018) will be screened online, and parts from his latest film “Other Than That, I’m Fine” (14′, 2020) will be previewed. Afterward, Aksu will join us for a conversation where we will discuss his practice, and reflect on how cinema can blur the dense separations and expose realities from the other side of the lens.
In “Cosmoroma”, we will watch a couple’s day trip to an island next to Istanbul who finds themselves captivated by the never-ending cityscape and sink into contemplation on urban decay. In “Routines”, which is set in Berlin, we will follow high jumper Jossie Graumann, observing a week in her life, training for the last chance to qualify for world championships. In “Other Than That, I’m Fine”, we will witness Aslı’s abrupt feeling of out of placeness. Joining a recent wave of immigration from Turkey to Germany, Aslı is new in Berlin. She auditions for the voice of the audio guide for an archaeological museum, facing her with objects from her home country, including a monumental Zeus Altar. Her workday of voiceover will reveal new connections and disconnections.
https://eren-aksu.com/about
Live-stream link: https://www.facebook.com/apartmentprojectberlin/live/
Previous episodes of Chromatic Wednesdays: https://www.facebook.com/watch/487333424612058/870336180382778

><
“Chromatic Wednesdays” is a culmination of our recent collective consciousness — the pandemic has disrupted our ability, creativity, and production. How do we as artists and intellectuals develop alternative forms of thinking and articulate this unclear existential situation? How can we get out of this limbo? How can we expel it?
Addressing these questions, Apartment Project developed a program titled Chromatic Wednesdays, which consists of 33 individual events, that will take place within eleven months starting from December 2, 2020. Each month will revolve around specific themes on current issues such as; immigration, pandemic, ecology, sustainability, gentrification, gender, survival, boundaries, geography, freedom of speech, and future. On three Wednesdays per month, artists, musicians, performers, scholars, scientists, and cultural practitioners will be invited to collaborate and share their research, practices, and experiences. Space will host a variety of events such as; concerts, performances, workshops, film screenings, lectures, exhibitions, readings, panel discussions, and dinner gatherings.
„Gefördert von der Beauftragten der Bundesregierung für Kultur und Medien“